You are at:Home»Cultivation»General Care»How to Grow and Care for Espostoa

Espostoa is a genus of columnar cacti, comprising 16 species known from the Andes of southern Ecuador and Peru. It usually lives at an altitude of between 2625 and 8200 feet (800 and 2500 m). Its fruit is edible, sweet, and juicy. The genus is named after Nicolas E. Esposto, a renowned botanist from Lima.

Espostoas are columnar cacti that mostly branch at the base to form a series of stems reminiscent of a big city skyline. The most notable feature of Espostoa is a presence in most species of dense, white "hair" which quite dramatically covers the stems giving them a soft, fuzzy appearance. This is just an illusion however, as underneath the soft hairs are numerous sharp spines arranged on many small ribs which circle the columns. In some species, the main central spine extends well past the hair making their threatening presence obvious.

Another trait of Espostoa that is seen in sexually mature stems is the flower-bearing lateral cephalium. This is an area along the sides of the stems that produce and especially dense wool and/or bristles out of which the flowers are produced. These structures are brown or gray or white and look as if something was smeared along one side of the stem. The flowers produced are cup or bell-shaped and are typically 1 to 2 inches (2.5 to 5 cm) in diameter. Flowers are mostly white or rarely reddish and nocturnal. 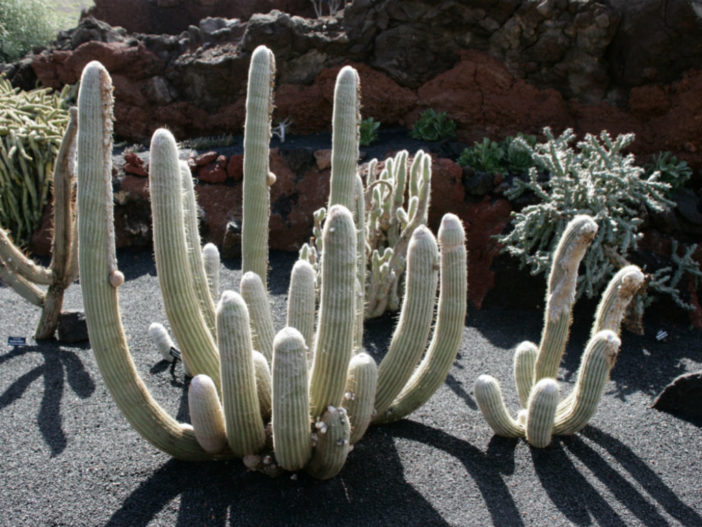 Several species of Espostoa, are especially popular in cultivation due to their fuzzy white hairy appearance. The plants are typically sold by large commercial growers as up to 12 inches (30 cm) long stems. However, being large columnar species, these plants do not grow nearly as vigorously in pots as they would in the ground. Plants tend to quickly fill the pots becoming pot bound and then growth slows to a crawl. As such, these plants rarely, if ever reach maturity meaning they do not produce the cephalium and subsequently, do not flower. On the other hand, those in warmer climates that can plant the species directly in the ground may indeed have plants that form a nice grouping of stems that will eventually flower.

Like all cacti, Espostoa requires a sunny location and well-drained soil. But in summer, it appreciates fertilizer and wetter conditions. In winter, it needs a rest, but the temperature must not drop below 54°F (12°C).

They are appreciated for their decorative qualities due to their white fleece.

Espostoa can be successfully propagated by both vegetative cuttings and from seed. The seeds are quite easy to germinate and grow. Their main requirements consist of high humidity levels, free-draining soil mix, and enough water, light, and nutrition.