Cereus is a genus of 34 officially accepted species of large columnar cacti native to South America. It is one of the oldest names in the family Cactaceae, described by Philip Miller in 1754. Until the 1920s, "cereus" is a name used to describe any cactus with a very elongated body, including columnar cacti and epiphytic cacti. Over 500 species previously classified in the genus Cereus are now reclassified as a separate genus.

Members of the genus Cereus are generally shrubby or tree-like columnar cacti with 4 to 10 well-defined ribs lined with rows of large areoles armed with several stout spines. Flowers are large, funnel-shaped, usually white, sometimes pink, purple, and rarely cream, yellow or greenish. They are fragrant and nocturnal. The fruits of some species are edible. They are globose to ovoid, naked, usually red but sometimes yellow with white or pink pulp. The seeds are large, ovoid, and glossy black.

The generic name "Cereus" derives from the Latinized form of the Ancient Greek "κηρός," meaning "wax, torch or candle" and refers to the columnar shape of the plants. 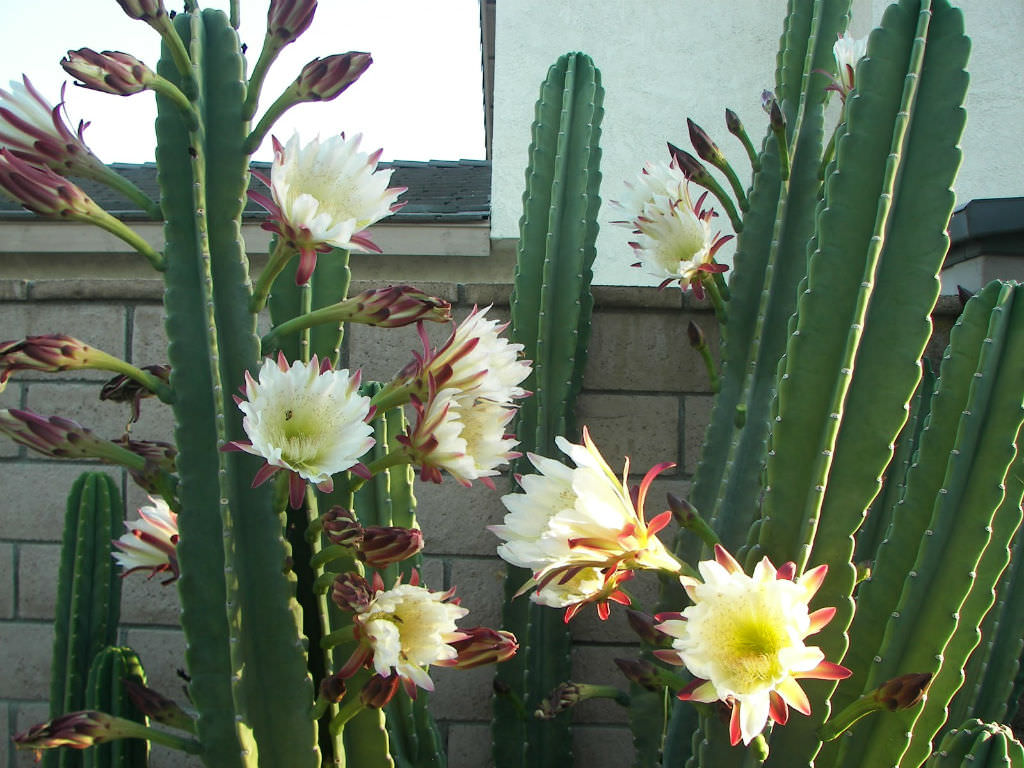 Most Cereus species are too large to grow indoors, but smaller and younger specimens can be kept inside until they mature.

Cereus cacti like full sun. They can handle partial shade but thrive in direct sunlight during the summer. A sunny window is a good spot to grow a Cereus indoors. Rotate the pot a quarter turn every week or two to encourage balanced growth. If possible, get your Cereus outdoors from spring to fall for fresh air and extra light. Increase sun exposure gradually to prevent sunburn.

These cacti do not like to have "wet feet" and need to be grown in well-draining soil. Use commercial soil mixes for cacti or make your own potting mix.

Most Cereus cacti are easy to care for and an excellent choice for beginners.

From spring to fall, during the active growth period, water thoroughly, but allow the soil to dry out before watering again. With the arrival of fall, gradually reduce the watering frequency. During the winter, when Cereus cacti are dormant, give them just enough water to prevent shrinking.

During their growing season, Cereus cacti like regular fertilizing. A balanced, water-soluble fertilizer, diluted to 1/4 strength, can be added to the water for each watering. A 10-10-10 fertilizer is ideal. Instead of making a solution of water and fertilizer, there are also dry fertilizers. They are applied to the soil surface or mixed with the soil when repotting. Do not fertilize during the winter.

While Cereus cacti are young, it is recommended to repot each year in early spring to provide them with fresh soil, inspect the root system, and move them to larger pots if necessary. Once they mature, repot when your cactus is outgrowing its pot. Knock away old soil, prune away any dead roots, then replace your Cereus in a new pot and backfill with fresh soil. Wait for a week or two before watering the repotted cactus.

How to Propagate Cereus

Propagation by stem cuttings is the easiest method to propagate Cereus because seed propagation is a slow process.

Cut the top off a Cereus stem and lay cutting on a paper towel in a dry location away from direct sunlight. Allow the cutting to callus for a week or two before placing it in a well-draining soil mix. Planting of the cuttings is best done when the cacti are actively growing.

Growing Cereus from seeds is a process that requires a lot of time and patience but also one of the most rewarding experiences. Sow seeds over the top of the soil and gently press them down. Keep the soil moist until seeds germinate. Provide a consistent temperature between 70 to 80 °F (21 to 26.6 °C). Sping and summer is the best time to sow the seeds.

Pests and Diseases of Cereus

Most problems associated with Cereus cacti are bacterial or fungal diseases caused by overwatering. They also do get the occasional insect pest.

Scale, mealybugs, and root mealybugs are the most common pest problems for Cereus. Less common pests include spider mites and fungus gnats. These pests are difficult to control because they are small and excellent hiders, making them hard to see.

If the roots have become dark brown or black and overly soft, the cactus could be experiencing root rot. Cut off the affected parts and replace soil before replanting. Check carefully for black, dark brown, or reddish spots on the cut surface. They should not be there.

Cereus cacti are non-toxic to humans or animals. However, the spines are sharp, so keep away from children and pets.