A brief look at how plants grow is necessary to understand what causes crested, monstrose, and variegated succulents. All plants grow in length by increasing the number of cells at the tips of shoots and roots. These regions of active cell division are called apical meristems, and this growth is called primary growth. Some plants, most notably the monocots, have meristems at leaf bases that cause leaf elongation. In woody plants, there are additional meristems called lateral meristems that produce secondary growth. The most important lateral meristem is the vascular cambium, which produces wood and bark. Monstrose and crested growths only involve primary growth.

Occasionally something called a growth mutation happens that "messes up" these regulated and coordinated cell divisions in the primary meristems. The causes of these mutations range from injury to bacterial or viral diseases. The three most common types of growth mutations are crests, monstrose growth, and variegation. 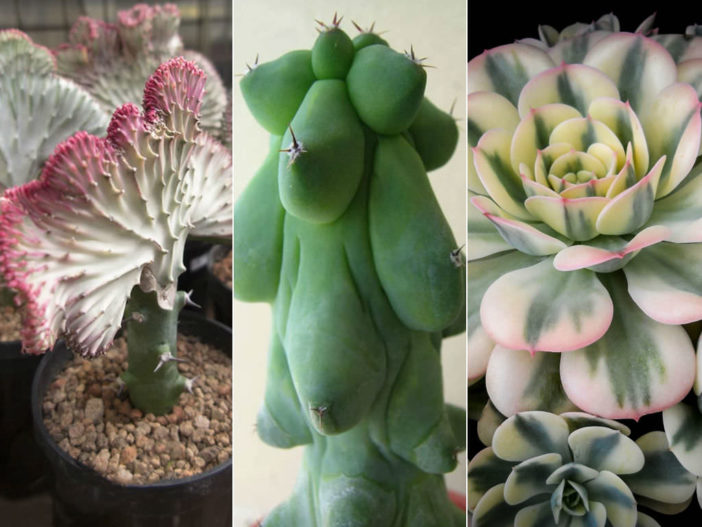 In crests, the growth mutation changes the shape of the apical meristem. Instead of a single growth tip, the area of active cell growth becomes a line, resulting in fan-like or crested growth.

In monstrose growth, the local apical dominance is lost, and every growth tip tries to grow as if it were the dominant point, resulting in a "knobby" or "lumpy, jumbled" growth.

Cresting and monstrose growths are not unique to succulent plants. Crests are found in many genera of non-succulent plants, including conifers and many common garden plants.

Crests and monstrose plants are grown the same as normal plants of the same species, except that crests and monstrose plants tend to be more sensitive. This is one of the many reasons they are often grown as grafts. Monstrose and crested plants flower and produce seeds just as other plants do. However, the growth mutations are not generally transmitted by seed, so the best way to propagate these plants is by cuttings.

Variegation in succulents is almost always caused by normal genetic variation, at least initially. Once this mutation occurs, they are selected for and magnified in the cultivation process. Most variegates in the wild would probably be eliminated due to the tendency for the variegated tissues to be naturally "weaker" and more prone to insect attack, sun damage, lesser ability to photosynthesize in low light situations (and hence become weak and die), and infection from fungi and bacteria. But in captivity, under the right environments, or protected from evolutionary pressures, many of these variegated plants perform beautifully and make excellent landscape and potted plants.