Schlumbergera bridgesii, commonly known as Christmas Cactus, no other plant seems to be equal, for its odd beauty or for the number of questions from frustrated owners about its care and culture. Stand beside a plant in full flower and just listen to the comments: "Why doesn't it bloom?"; "It flowered last year but not this year. Why?"; "How much water should I give it?"; "It rots at the base. Why?".

Question after question and with good reason. The Christmas Cactus is confusing. Even botanists don't always agree, except on where it originates, Brazil. There it is an epiphyte, which means that they nestle in the high branches of rainforest trees. But in the other parts of the world, it has become a pot plant capable of a lively existence in the home or greenhouse.

Prized For Its Flowers

Its pendant flowers, brilliant cerise pink with gold stamens against a background of odd, crab-like, jointed, deep green foliage is as exotic as its orchid neighbors in the tropical forests of Brazil. It blooms for about 2 months at a time of year when good flowering plants are at a premium. As soon as the first flowers fade, more open. Mature plants can produce hundreds of flowers. Its life span is measured in decades. 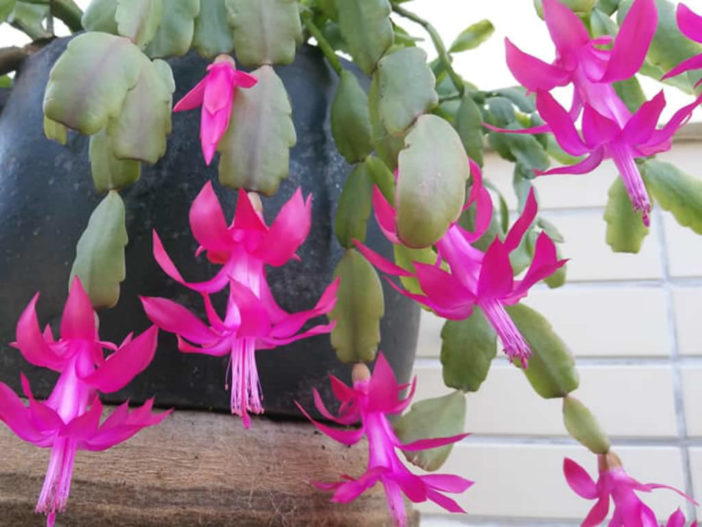 Being tropical jungle plants, they need more moisture and shade than most other cacti. But the term "more moisture" is relative. The soil should be moist but not too much so. Never set the plant in a saucer of water. Too much water causes the roots to rot. Let the soil dry out occasionally well down into the pot to prevent the soil from going sour.

The soil itself should be a little richer than that used for other cacti, but since the plant likes a slightly acid soil, avoid lime or bone meal. A mixture of 2 parts good cactus potting mix, 1 part coarse builder's sand, and 1 part peat moss is excellent.

Now fill the pot to within a half-inch (1.3 cm) of the rim and press the soil down firmly with the fingers. Place the plant in a bright place away from direct noonday sun and drafts. Try to make this spot almost permanent, as the Christmas Cactus does not like to be moved about. Choose an east or west window as the best location for the plant. A south window with some shading is next best.

The number of questions asked about Christmas Cactus is more amazing considering that the plant thrives on neglect. Weeks without water won't harm it. In fact, too much care is dangerous to the plant.

Late spring is the best time for repotting, should that be needed. Transfer the plant into a pot that is one size larger than what it is in now. Then set it in the shade outdoors for the summer.

New leaf growth starts in the spring. When it does you can start fertilizing it about every 2 weeks with a good liquid fertilizer, following directions on the package.

Time For a Nap

In early fall when nights start to get cool, bring the plant inside and give it a 30-day nap. Place it in a cool, dim location and do not water it for about a month. Then gradually expose it to full sunlight and increase the water supply over what it had when it was outside.

Christmas Cactus is a short-day plant. As the days get shorter its buds are formed. This is when most of the mistakes are made that delay its blooming or stop it altogether.

Strong artificial light on it at night will retard the bloom. if you must turn on the lights where the plant is, cover it with a double sheet of newspaper, sheet or towel. Watering at this time, when the buds are formed, is decreased. If the plant receives no artificial light from sundown to sunup, it will justify its name by blooming approximately at Christmas.

The plant is tough and adaptable. It can be grown on its own roots or those who are technically inclined can graft it on Pereskia or Opuntia and make standards out of it.