Cacti growing in the wild with paddles and branches tend to drop them to the ground where they root in the rainy season. This is a form of vegetative self-propagation. Even a smashed cactus will attempt to grow roots from the pieces that make contact with the ground. Prickly Pear Cactus (Opuntia compressa), which grows in U.S. Department of Agriculture plant hardiness zones 4 through 9, forms colonies with its paddle-like branches through self-propagation. It is possible to regrow a cactus from an arm if taken from a healthy cactus.

While you can root a cactus branch any time of year, rooting while the cactus is actively growing gives the best chance of success. Try rooting the arm in late spring or summer while nighttime temperatures stay above 60 degrees Fahrenheit (16 degrees Celsius). When temperatures fall below 60 F (16 C), the development of roots slows and the arm dries out before rooting. Branches taken from dormant cacti have the worst chance of rooting.

Once the arm is cut or falls off the cactus, let it dry at room temperature in a shady area for two to seven days. The cut end needs to callus over. This hardening of the wound prevents rotting. It also stops plant diseases from entering through the wound and infecting the cactus arm. 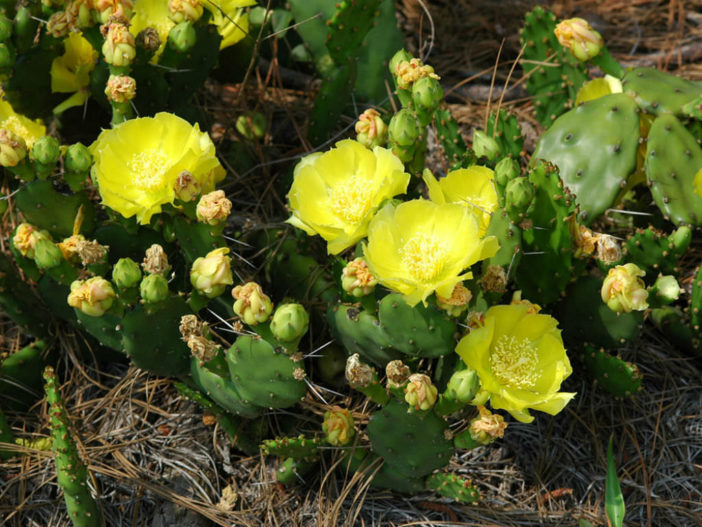 The soil for rooting cactus needs to drain quickly, but hold some moisture near the forming roots. The most common mixture is half organic and half inorganic materials. Peat moss holds moisture and provides slow-release nutrients for the developing roots. Use coarse-textured sand, which does not compact down like fine-textured sand. The sand improves the drainage properties of the rooting mixture.

Handle the cactus piece with care so it does not stab your fingers. Use heave-duty gloves, tongs or a folded newspaper wrapped around the prickly piece when moving it. Avoid touching the piece with your hands if it is spiny. Press the cut end of the cactus into the soil mixture. If the branch is large, bury the bottom part of the cactus until the soil supports the branch.

Most cacti will form roots in four to six weeks during the growing season. Keep the soil damp by misting the soil, but do not over-water the rooting branch. Water deeply, but do not let the container sit in water, which will lead to rot. Once the roots are established, then the plant pot will lift up when the arm is gently picked up. Let the soil dry between watering sessions once the roots develop.