You are at:Home »Cultivation »How to Grow and Care for Maihuenia

Maihuenia is a genus largely accepted as containing two species which are quite distinct from other cactus. The plants in this genus are so different that they have been classified as the sole genus in the subfamily Maihuenioideae.

These plants grow as mats which hug the ground and are made up of segmented short-rounded stems. The stems feature typically 3 spines per areole and also have small rounded leaves which do not fall off as they do in Opuntias. The flowers come from the ends of the stems and are shades of yellow from near-white to orange. Club-shaped fruits are fleshy and contain bracts.

The natural habitat of this species is in the region known as Patagonia in the southern parts of Argentina and Chile at elevations of 8,000 feet (2450 m) elevation. In this harsh environment, these cacti commonly endure frost and are starting to become sought by cold-hardy cactus growers in North America.

Maihuenia is an easy-to-grow plant. It can survive outside in the garden in the sunny rockery on a sheltered place, but only if it's protected with a sheet of glass during the wintertime. It is also very good for a large pot which can be stored inside an unheated greenhouse or on a balcony, somewhat protected from moisture during the winter, but is probably safest to grow it in the Alpine House or in a raised bed inside an unheated greenhouse all year around, with lots of ventilation. They should not be kept hot in summer as they are from high elevations. 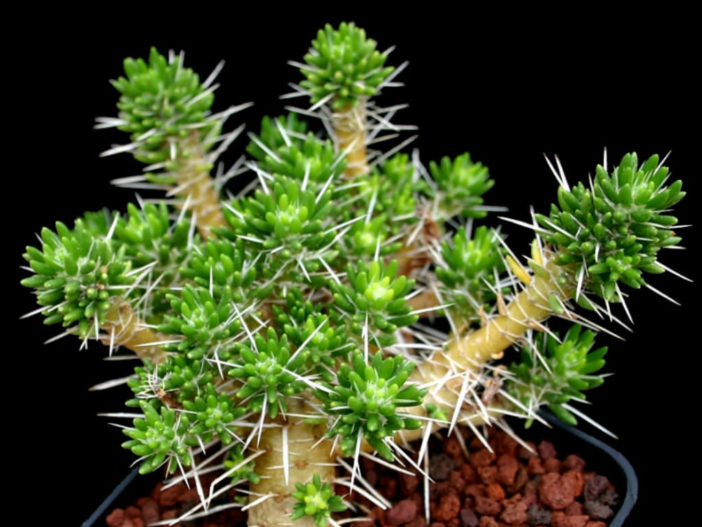 During the growing season it's good to enrich the soil using a fertilizer rich in potassium and phosphorous, but poor in nitrogen.

For a balanced development, it is best to place it in a position where it is exposed at least a few hours of direct sunlight.

Water these plants only from time to time if grown outdoors, but it should be watered abundantly if grown in a pot or in the greenhouse, during the summer.

The spring weather, with a high temperature swing between the day and night hours, and pretty frequent rains, can favor the development of fungus diseases, which should be treated with a systemic fungicide. Repot it every 2 to 3 years.