Aristaloe is a genus of evergreen, flowering, perennial plant in the family Asphodelaceae from Southern Africa. Its sole species is Aristaloe aristata, known as Lace Aloe or Guinea-fowl Aloe. The species was described by Adrian Hardy Haworth. Its species name "aristata" comes from the Latin for "bristly" or "awned", and refers to the lacy edges of the leaves. Its generic name has the same etymology. Recent phylogenetic studies have demonstrated that the genus Aloe is polyphyletic and that this unusual species is not in fact an aloe, but is more closely related to Astroloba and to the four "Robustipedunculares" species of Haworthia. It has therefore been moved to its own genus, Aristaloe, to account for its separate ancestry and genetic uniqueness. 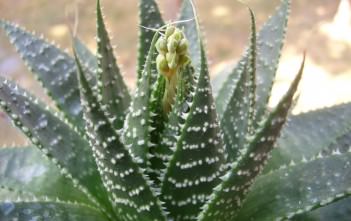