Meaning: Resembling Telephium, derives from the genus name "Telephium" and the Latin suffix "oides," meaning "looks like or similar to"
Pronunciation: tel-ee-fee-OY-deez 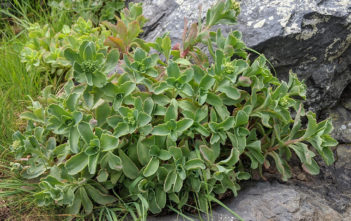 Hylotelephium telephioides (Allegheny Stonecrop), formerly known as Sedum telephioides, is a succulent with a short rootstock that produces…