Meaning: For Mauretania (present northern Morocco and western and central Algeria north of the Atlas Mountains), an ancient country in North Africa that existed as a tribal kingdom of the Berber Mauri people.
Pronunciation: maw-rih-TAWN-ee-ka 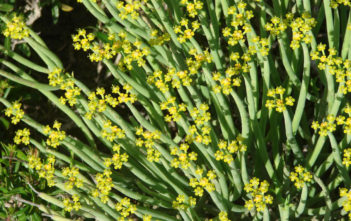 Euphorbia mauritanica (Pencil Milkbush) is a succulent shrub with many fleshy, upright, pencil-thin branches that grow from a thick…