Succulents are invaluable plants because they are beautiful and nearly indestructible. Succulents are water-retaining and are adapted to arid climates and soil conditions. High temperatures and low precipitation have forced these plants to store water in their leaves, stems, and roots. This adaptive mechanism has resulted in an incredible variety of different leaf forms and plant shapes.

Some of the best-known succulents are cacti, which are a unique subgroup that has evolved into many different species. The succulents also include some well-known plants such as Aloe and Agave. No matter which variety of succulent you are growing, however, their requirements are very similar:

Place the largest, most dramatic first and the smaller ones around them. Remember, many succulents can't be cut to a lower height after they have grown. When placing plants, think about how tall the plant will get in the location.

Why are some succulents smaller and more expensive than the larger succulents?

The smaller varieties generally grow slower than the faster-growing varieties; thus, they are often older. 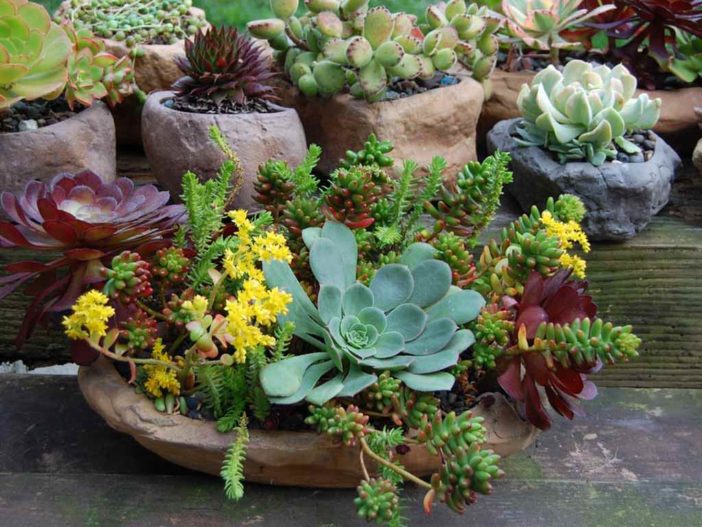 Succulents can handle the cold as well as heat. Just like the desert, which can have cold nights, a succulent can live in temperatures down to even 40 degrees F (5 degrees C).

Succulents prefer light, such as in the open garden or a south-facing window. Some species will scorch if exposed to direct sunlight, and the leaves will change to a brown or white as the tissues are destroyed. Watch the leaves as an indication of if the sun exposure is correct. A succulent without enough light, however, will begin to stretch with an elongated stem. If this happens, provide better light and prune your succulent back to its original shape.

Succulents will need more water in the summer and during establishment. Water generously but allow the soil to dry in-between watering. This is why good drainage is important. In winter, the plant will go dormant, so water it every other month. If you over-water, you could cause plant rot. The succulent may look healthy at first during over-watering but eventually will die as the rot has begun in the roots and isn't showing above ground yet.

Over-watered succulents will look discolored and soft—yellow or white with loss of color. Remove it from the pot and look for rotted roots. Rotted roots should be cut off and replant your succulent in a drier area.

Under-watered succulents will stop growing and shed leaves or generate brown spots on their leaves.

Your succulents should be planted in a soil that provides for good drainage. Succulents will benefit from an inorganic agent like perlite, which will help aeration and drainage.

Fertilize during summer growing season but stop entirely during the winter.