Meaning: Small heart-shaped and attached at the pointed end, derives from the Latin prefix "ob," meaning "toward, to, on, over, or against," noun "cord," meaning "heart," and the diminutive suffix "ellum"
Pronunciation: ob-kord-EL-um 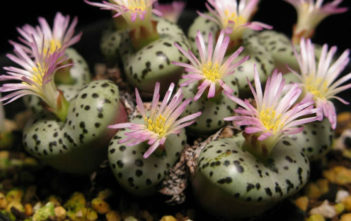 Conophytum obcordellum (Dumpling) is a dwarf succulent that forms clumps of bodies composed of two fused leaves. The bodies are up to 1.2…