Plumeria is a genus of flowering plants in the Dogbane family, Apocynaceae. Most species are deciduous shrubs or small trees. The species variously are indigenous to Mexico, Central America and the Caribbean, and as far south as Brazil and north as Florida. Common names for plants in the genus vary widely according to region, variety and whim, but Frangipani or variations on that theme are the most common. Plumeria also is used directly as a common name, especially in horticultural circles. The genus is named in honor of the French botanist Charles Plumier. 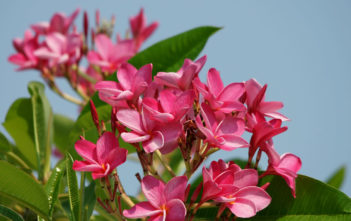 Plumeria rubra (Frangipani) is a deciduous plant that grows as a spreading shrub or small tree up 25 feet (7.6 m) tall. It has a thick…